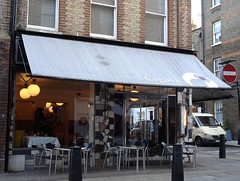 Kake and bob visited on a Saturday evening in December 2012. We hadn't booked, but this wasn't a problem as we were there fairly early; the place was empty when we arrived a little before 6pm, though it did fill up more during the hour we were there. Kat booked online for her April 2016 visit - confirmation was by email, no phone calls involved.

Berenjenas almagro (pickled baby aubergines; £3.60) photo were fine. Pan con tomate (toasted bread with garlic and tomato; £3.50) photo had good flavour but seemed to have been made a while in advance, as the chopped herbs on top had started to discolour around the edges and the tomato juices had soaked so far through the bread that it fell apart when picked up.

Chorizo a la brasa (grilled chorizo with fried breadcrumbs, peppers, and cumin; £5.30) photo was sadly burnt in places, to the point of unpleasant bitterness, though the breadcrumb accompaniment was good. Lengua cocido (poached ox tongue with purple carrots and romesco sauce; £4.70) photo was one of the better dishes; the tongue and carrots had nicely contrasting textures, and the carrots in particular had a very good flavour.

Navajas a la plancha (grilled razor clams with garlic, parsley, and lemon; £8) photo were very slightly gritty, but competently cooked aside from that. Ensalada de mojama (wind-dried tuna with ruby chard, tomato, and radishes; £6.20) photo sounded good on the menu, and the tuna had a nicely buttery texture, but the salad leaves had already started to wilt under the dressing. Anchoas fritas (deep-fried anchovies with alioli; £5) photo were nicely meaty, and the alioli went well with them.

Patatas bravas (deep-fried potatoes with spicy tomato sauce; £4.70) photo were half-burnt; this isn't obvious in the photo because they'd cunningly put the burnt ones in the bottom of the dish. Croquetas de setas (mushroom croquettes; £4.70) photo were OK, but we weren't exactly fighting over who got to eat the third one. Alubias con cardo (white beans with cardoon and alioli; £5.20) photo had somewhat tough skins, but were well-flavoured.

Kake's verdict: Disappointing, overall; too many misses and not enough hits.

Kat's verdict: like Kake I was disappointed with the food. Spicy lamb meatballs (£6.40) and salt cod fritters (£6) were good but the rest was very patchy - I wouldn't bother with the desserts. We found the service rather brusque too: our request to move from our very cramped table (to the free one next to it) was refused. It was also really noisy, I had to shout to make myself heard.

Accessibility: Not sure if there's a step to get in, but in any case the loos are in the basement, down a flight of stairs with a bend in the middle and a handrail only part of the way down.