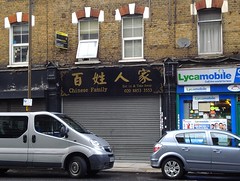 Chinese Family was a Sichuan restaurant in Greenwich. It has now closed. According to Google Street View, by June 2015 it had been replaced by an Italian restaurant called Reginella.

Sichuan restaurant in Greenwich. It was previously known as Mr Yummy (老四川菜館), but changed its name in early 2011 to Chinese Family (百姓人家). It may be the same people in charge, but the menu also changed slightly.

Like many Chinese restaurants in London, they serve both a range of standard Anglicised Chinese food and a number of proper regional Chinese dishes (Sichuan in this case). As of early 2011 the regional dishes are grouped in their own section of the takeaway menu, entitled "Chinese Family's authentic oriental dishes" (paper version) photo or "Oriental dishes" (online versions).

Kake and bob tried the takeaway option in March 2011, ordering via Hungry House. Some of the dishes we ordered weren't available, since the menu on Hungry House hadn't been updated since the menu change — they phoned us up to ask what we'd like to have instead. It turned out later that our requested substitutions weren't on the current takeaway menu either, but they were happy to make them for us, so it seems the advertised takeaway menu is only a subset of what's available.

Poached seabass with pickled greens in soup (酸菜魚/suān cài yú; £13.50) was pretty good, with nice tender fish and a lovely sour flavour from the pickled greens. This was one of our "off-menu" choices. The other was spicy chilli shredded potato (香辣土豆絲/xiāng là tǔ dòu sī; £4.20); this was OK, with the potato shreds still crisp as they should be, and some nice shreds of red chilli to give heat, but it was perhaps a little too sweet for Kake's taste.

Grilled minced pork dumplings (£3.50) were quite tasty and appeared to have been made in-house. They were a vast improvement over the same dish ordered a few months earlier, when it was still called Mr Yummy. Mapo tofu (£7.50) was OK, though nothing special; there was a singular lack of Sichuan peppercorns.

On previous orders in September and October 2010, before the name change, Kake's main impression was that although the Sichuan dishes were pretty faithful to the cuisine, the quality of the ingredients (particularly the pork mince) was not very good, and the execution was only average. However, our March 2011 order showed encouraging signs of improvement. Standout dishes prior to the name/menu change were the sliced beef and ox tripe in chilli sauce (夫妻肺片/fū qī fèi piàn) — very flavourful, with plenty of Sichuan pepper — and the deep fried diced chicken with chilli and pepper (飄香辣子雞/piāo xiāng là zi jī) — nicely fried, not too greasy, and really quite spicy. Only the former of these is still on the takeaway menu as of March 2011, though they might be able to make the chicken dish too if you ask.