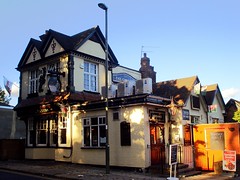 The Chequers was a traditional pub in Hendon. According to the Dec 2016/Jan 2017 London Drinker, it closed in September 2016.

The decor is traditional, with a patterned carpet, wood-panelled walls, and something of a lack of natural light. There's a pool table, several TVs, and a few coin-operated machines selling chocolate mini eggs and other snacks. A beer garden is to one side.

Although their website says that "a good range of drinks are available both bottled and hand pumped", on Kake's September 2010 visit the three handpumps all had their clips turned around to indicate they were off, and the member of staff behind the bar said they never have anything on them. Strongbow was £1.40/half.

On a Thursday afternoon/early evening in September 2010, there were only a few other customers in. Sport was showing on the TVs, with the sound down low.

According to their website as of September 2010, food is served noon-8pm Tue-Wed, noon-9pm Thu-Fri, and 12:30pm-5:30pm Sat-Sun. It's fairly standard pub food (sausages and mash, etc). We've not tried it so no idea of quality.

Accessibility: Three steps up to get in, though there is a handrail. Once you're in, it's step-free to the bar, most (if not all) of the seating area, and the toilets, including one marked with the "disabled" symbol.