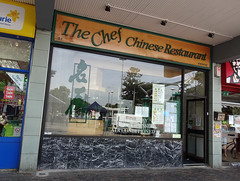 The decor is fairly plain, with a hard-wearing carpet underfoot and recessed spotlights in the utilitarian ceiling. However, there are a few wall hangings and decorative screens here and there, as well as real flower buds in vases on each table, and proper linen napkins and tablecloths. It seats around 50, including one big table for eight with a lazy Susan.

Kake and Pippa visited on a Tuesday early evening in August 2016. There were two other customers when we arrived around 6:15pm, and another party arrived while we were there. A few others came in for takeaways too. Everyone except us seemed to be regulars. Classical (Western European) music was playing.

A bowl of prawn crackers was placed on the table as we sat down; no charge for this appeared on the bill.

We started with tiger's whiskers (£8.50) photo, a vegetarian version of crispy shredded duck consisting of lightly-cooked julienned celery, green peppers, onions, bamboo shoots, and mushrooms presented with plum sauce and pancakes for wrapping photo. This worked well, and made a nice change from the meaty version; the vegetables were still crisp, and the flavours were enlivened by the plum sauce.

Scallops with cashew nuts in yellow bean sauce (£9.50) photo wasn't bad. The scallops were well-judged in terms of both cooking and seasoning, and neither too thinly-cut nor too scanty. There was rather too much onion in the dish for a good balance, though, and the onion was fairly lightly cooked so ended up rather too assertive against the more subtle flavour of the scallops.

Beancurd family style (£5) photo was fine, with a good texture and flavour to the beancurd but a rather one-dimensional sauce. Plain rice was also fine, though surprisingly expensive at £3.50 for a relatively small portion.

Service was friendly, welcoming, and helpful. No service charge was added to the bill.

Kake's verdict: It's a decent enough high-street Chinese; nothing particularly exciting, but fine for what it is.

Accessibility: A small step to get in. Toilets are up a flight of stairs.