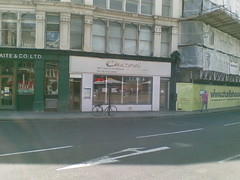 Now closed; was an Indian restaurant in Clerkenwell.

As of October 2013 the premises have been acquired by Temptations Cafe and are due to open soon as their second branch.

Indian restaurant in Clerkenwell, on the corner of Clerkenwell Road and Goswell Road. They also do takeaway.

bob, Tom, and Ash visited for lunch in August 2007. We had the all you can eat buffet, which was about £8. Naans were extra. The buffet consisted of two meat curries, two vegetable dishes, a dhal, pakora, and some tandoori chicken wings. It was very good. The normal menu is supposedly very good as well.