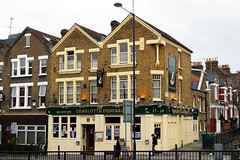 A pub near Archway Station.

Inside, the pub is quite spacious, with two separate rooms. The main space has the bar along one wall, and a range of tables of various sizes scattered around. To the other side, opposite the bar, is a large rectangular section of long benches and low tables. A second room can be found up a step to the rear, with further tables and a couple of leather couches in an alcove with some bookshelves.

There are five handpulls for ale at the bar, though on Ewan's September 2013 visit only two were on, London Fields Love Not War and Sambrook's Wandle, though the ale was in top form. There is a large range of keg fonts, including Pilsner Urquell, Erdinger, Vedett, Fruli, and Addlestone's and Stowford Press ciders. There's also a wide range of bottled beers, including a healthy selection of London beers. Wines are listed on a large chalkboard to the side of the bar.

On Ewan's Wednesday evening visit, there were only a few customers in, but it was a pleasant atmosphere. Music was playing, though not too loudly to disturb conversation.

A large range of packaged bar snacks is available, including plenty of crisps, various types of nuts, and snacking sausages. It doesn't, however, appears as if there is any food beyond this available.

There is a stack of boardgames by the benches in the front room. A quiz is advertised on Tuesday nights at 8:30pm with free entry.

Ewan's verdict: This seems like a pleasant local pub that I'd be keen to return to visit at a busier time.

Accessibility: There's a step to get in, and the toilets are up a further step to the rear of the pub.