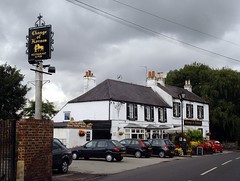 Note: According to the Feb/Mar 2020 London Drinker, the Change of Horses reopened under new management in December 2019, following a period of closure. We haven't visited since, and so some or all of the details below may be out of date.

The decor is traditional with a slightly upmarket feel; the old-school padded banquettes are upholstered with subtle heraldic designs, echoed by similar fabric in the curtains that hang at the large unfrosted windows. There's a beer garden at back, partly under cover, and a couple of benches out the front, also under cover.

Kake visited on a Thursday afternoon in September 2013. There were quite a few people in, many of them having lunch, and most if not all of them appearing to be regulars. No music was playing, but there was a pleasant buzz of conversation.

The handpumps on the bar were clipped for Young's Bitter, Old Speckled Hen, Harveys Sussex Best (£1.80/half), and Sharp's Doom Bar. They also had clips for Abbot Ale and Courage Best, but these were covered with paper signs noting that they were sold out; as I arrived, I heard a member of staff explaining to another customer that they had more Best in the cellar but it wasn't quite ready to serve yet.

Food is served lunchtimes at least, from a regular menu plus specials written up on a board by the bar. On our September 2013 visit, the menus weren't out on the tables; you had to ask for one from the bar.

According to a sign seen in September 2013 photo, the Orpington Folk Club meets here on Thursdays from 8:15pm, with guest and open mike events.

Accessibility: No step to get in. At the left-hand entrance, there are two sets of fairly narrow and heavy doors with ridges at the thresholds; the right-hand entrance is a little easier to get into. It's step-free to the bar, toilets, and seating area; not sure about the beer garden. The pub has its own car park.