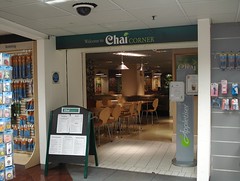 Chai Corner was an Indian cafe in Croydon. It has now closed.

It was previously located in the basement of Allders department store (pictured). However, following the closure of Allders, it switched to operating from a unit in North End Mall (previously Allders Mall), with some outside seating on North End. Note that although its postcode begins "CR9", it's actually physically located within the CR0 postal district. See Locale CR9 for an explanation.

Prior to the move, they served various teas, cakes, biscuits, Indian snacks, curries, sandwiches, and breakfasts (including the interesting-sounding "desi breakfast"); we aren't sure how much of this has survived, though they definitely still do snacks, curries, and wraps.

Kake visited the basement location a couple of times in July 2011, the second time in the company of Sarah. The first time, I had chai latte (£1.95), which was unsweetened and only very subtly spiced, and some of the Indian snacks photo.

Veg tikki (95p) was relatively spicy, with bits of red chilli in, while pakoras (£1.45 for five) were nicely fried, with a good but not over-dominant onion flavour. Vegetable samosa (95p) was competent enough; the pastry wasn't the best I've ever had, but at least it was proper samosa pastry rather than filo. On our second visit, we had some chocolate chip cookies (50p for two) which were OK but nothing special.

Kake visited the new location again in September 2013. Pani puri (£3.45 for four, eat-in) photo were the second most expensive per piece I've ever had in London (the most expensive being at Gaylord, which is a full-service white-tablecloth restaurant), and only average in quality. The puri shells were a bit stale, and there wasn't enough pani (flavoured water). However, they were presented attractively enough on a patterned plate, scattered with chaat powder.

Service was a little curt, and there were two attempts to upsell me on additional items.

Kake's verdict: Probably not worth much of a journey; the food and drinks I've had here so far have generally been competent but nothing special. I might visit again if I was passing and had an urgent pani puri craving.

Accessibility: Step-free access to serving counter and seating areas. No toilets, though there are some in the neighbouring Whitgift Centre.