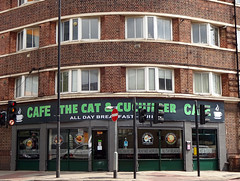 Despite the quirky name, this is a fairly standard greasy spoon cafe in Bermondsey. It's on Tower Bridge Road adjacent to the junction with Druid Street.

secretlondon had breakfast here one morning in September 2008. I had set breakfast one which came with fried bread photo and coffee photo. The coffee wasn't that strong but was better than many of the Bermondsey cafes, which do instant sprinkled on top of frothy milk.

bob visited on a Saturday in August 2010. I had a set breakfast three with extra egg (£5) photo. It was fine, although I wasn't brought my tea or indeed asked if I wanted tea or coffee with it.