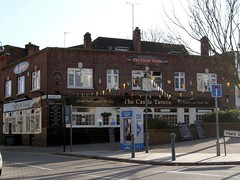 There are no handpumps for real ale, and the keg taps offer only the most ordinary of options: Stella, Fosters, Strongbow, and the like. They do have a couple of bottled West African beers — Star and Gulder — but the main interest of the pub lies elsewhere, in its extensive menu of Ghanaian food ("Amma's Fare").

Previously a two-door pub, today there's only one entrance kept open, and this is the one furthest away from the dining area. Intending diners are thus led on a little tour of the pub, winding around the interior past the door to the beer garden, the loos, and a couple of pool tables.

The L-shaped dining area seats around 35-40 people, and the short part of the "L" can be booked out as a VIP area. The tables are covered in paper tablecloths, a large pull-down projection screen is at one end, and a flatscreen is tucked away in the VIP area.

Kake and friends visited on a Wednesday evening in September 2015. There were a few people in when we arrived a little after 6pm, spread throughout the pub including in the garden and dining area. No music was playing, but various TV programmes were showing on the flatscreens with the sound on, including a rather stilted-sounding (possibly dubbed) drama in the dining area. By the time we left around 9pm, there were two or three other parties eating, and the front part was fairly full with drinkers and pool-players.

Red red (blackeye bean stew with fried plantain; £8) photo was spicy and tasty; we tried this in the vegetarian version as well as the mackerel-containing version. This is possibly the only dish on the menu that can be made properly vegetarian, as our waitress warned us that the others contain meat and/or fish stock.

Spinach stew with boiled yam (£9) was very nicely savoury. Despite the name, it wasn't particularly spinach-heavy, and really seemed to be more of an egusi (ground melon seed) stew.

Okro (okra) stew with mixed meat and fufu (pounded yam; £9) photo was a huge portion — Kake took half of it home for dinner the next evening. The pounded yam was good; smooth and non-sticky. There was plenty of okra in the stew, and it wasn't overly oily. The meat was of rather mixed quality; the tripe and cow skin were well-handled, but there were large lumps of flavourless fat in the beef.

We'd asked for some kelewele (spiced fried plantain) and Ghanaian salad to start, but they didn't have any on that evening. They also didn't have any soda, but a pint of lime squash was 50p.

We ordered our drinks at the bar, but food orders were taken at our table and the bill brought afterwards. Bar service was rather slow, partly due to the layout of the pub — it's almost impossible for the staff to see through from one side of the bar to the other, so very hard for them to see if anyone's waiting.

Accessibility: Only a very small step to get in, but there are steps to the toilets, the dining area, and the garden.