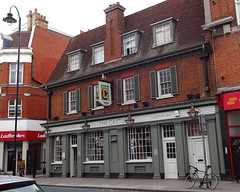 Following a mid-2014 refurbishment, it's lost its old traditional interior and now feels less like a pub and more like a cross between a bar and a restaurant. The floor is bare boards, and much of the seating is on high stools. The decor is the currently-trendy faux industrial, with exposed ducting and stylised bare-filament bulbs. A dining-only area is at the back, past an open kitchen. There's also a beer garden, part of it under cover.

Kake visited on a Thursday afternoon in April 2016. Five of the six handpumps were on, all offering Young's ales: Special, Gold, Bitter, Tower, and Common. They also had Young's and Meantime lagers on keg. A pint of lime and soda was £2.10. Music was playing, not too loud. There was a fair bit of shouting from the open kitchen, which was a bit off-putting and quite startling at times.

They have WiFi, which is free but requires you to give them your email address and postcode (it doesn't appear to check whether these are valid, though). It was pretty slow and laggy on our April 2016 visit.

According to their website as of April 2016, quiz night is Wednesday from 8pm.