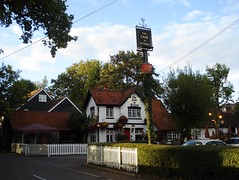 Inside, there are two nice enough bar areas at the front, and a "barn-style" dining area further back. There's also a fair bit of outside seating. The pub has its own carpark.

Sadly, there were no free tables in either of the front bars, so I had to go and sit in the "barn", which had no natural light, some rather unpleasant orange-yellow artificial light, and some of the cheesiest piped music I'd heard in a while.

According to their website as of September 2009 (and a sign seen outside in the same month), food is served noon-9pm Mon-Sat and noon-5pm Sundays and Bank Holidays. The menu was a little uninspiring photo, but covered most of what you'd expect from pub food. I tried the spinach and ricotta cannelloni (£8.50), which was perhaps a little over-optimistic of me; it turned out to be fairly gloppy and flavourless, with the only real flavour provided by a thick layer of melted cheese on top and a small pocket of tinned tomatoes lurking within. The side salad was perfunctory and not dressed, though it was garnished with a few bits of tinned sweetcorn. The vegetables in the coleslaw seemed a bit old and dried out. It's possible that their non-vegetarian dishes are better, but on the strength of this meal I won't be rushing back to find out.

Accessibility: There's a ramp up to get in at one of the entrances (there's one step down at the other), though a doorbell with a "press here" instruction suggests that the accessible entrance isn't always open. Once you're inside, it's step-free to much (though not all) of the seating area and also to the ladies' (didn't check the gents').