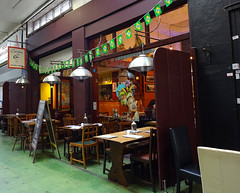 Carioca was a Brazilian restaurant in Brixton. It has now closed.

Located on Market Row in the covered market, this is a small unit, like most of its neighbours, seating only around 20 people inside and a few more outside. The decor is colourful, with murals and vintage advertising posters on the walls, and vinyl decals on the tables depicting a wide variety of vegetables. The floor is wooden, as are the sturdy chairs and tables.

Kake visited on a Friday lunchtime in March 2017. There were two other customers in when I arrived a little before 12:30pm, and a couple more turned up while I was there. Music was playing, not too loud.

I went for the favela da rossa (£7.85) photo, which consisted of plantain slices sandwiched with mozzarella then deep-fried in batter, topped with a couple of poached eggs and served on slices of tomato. This was pretty good overall, with a nice combination of textures and flavours. The batter wasn't too thick, and the sweetness — which is often a worry with plantain-based dishes — was well-controlled. The tomatoes were under-ripe, but this isn't surprising for the time of year, and it actually worked well in context. The only mis-step was that one of the eggs had a somewhat runny white as well as a runny yolk.

Tea (£2) arrived in a large pot with a nicely chunky cup and saucer. Service was both friendly and efficient, and a large bottle of complimentary tap water was placed on the table as I sat down without me having to ask. No service charge was added to the bill, and there was nowhere obvious to leave a tip.

Accessibility: No steps to get in, just a small ridge at the threshold. Like other units in Market Row, there are no toilets, but it's just a few metres from the Market Row public toilets, which cost 20p but have step-free access and a large accessible cubicle with baby change facilities.