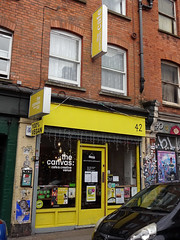 The walls are painted white and covered with (sanctioned) graffiti, with prompts here and there in case you can't think of what to write. The ground-floor seating is quite crowded in, to the extent where they have stools along the edge of the banister to allow use as a seating counter. The fairy-lit basement is more spacious.

Orders are placed at a service counter at the back, which also has a display of some of the food on offer, as well as jars of loose-leaf tea.

Kake and friend visited on a Thursday lunchtime in August 2019. It was quite full when we arrived a little before 1pm, and we ended up sharing a table with another customer. Music was playing, slightly louder than ideal for conversation.

We weren't able to choose from the full menu, as the kitchen had opened late that day and so options were limited to salads and arancini photo of one of each. A mushroom arancino (£2.50) had a good mushroom flavour and wasn't at all stodgy. Kale, squash, and chickpea salad had unadvertised pomegranate seeds (which Kake doesn't like) and the squash was unpeeled (which Kake was fine with since the slices were thin enough for it not to matter, though friend was less keen); the tahini dressing worked very well though.

A pot of Earl Grey tea (£2.50) was a generous size and made with loose leaves, but perhaps fewer leaves would have been better as it got overbrewed and tannic very quickly.

Accessibility: A small step to get in. It's quite small and crowded inside. Some of the seating is down a flight of stairs in the basement, with a handrail some but not all of the way down. There's usually a toilet on the ground floor, but on our visit this was out of order, with the only working one being in the basement.