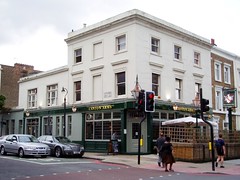 A pub near Stockwell Station, in South Lambeth. It closed for a refurb and management change in late 2009, and reopened in February 2010.

Prior to the change of management, this was a perfectly decent real ale pub, but has now been done up in a more gastropub style, with bare wooden floors and the rear of the pub taken over by dining tables laid for service, though the front has a couple of leather seats and a number of tables for drinkers (a few large ones and several rickety little tables with stools along the front). There's also an outdoor seating area along South Lambeth Road in front of the pub. On a Friday lunchtime visit shortly after it reopened, the place was fairly empty, with only a handful of other customers, but no doubt gets busier in the evenings, and indeed returning a year later on a Sunday afternoon, the place was packed out back, but still with plenty of tables free at the (relatively quiet) front of the pub.

There are four handpulls for ale, tucked away down the side of bar (but kept updated on a chalk board), with Betty Stoggs, Tribute, O'Hanlon's Port Stout and one off on a February 2010 visit, and a different but equally decent line-up a year later (including a well-kept pint of Sambrook's Junction for £3.10/pint). There's also a range of regular draught lagers and cider.

As of February 2011, food is served 6pm-10pm Monday, noon-2:30pm and 6-10pm Tuesday to Saturday, and noon-4pm on Sunday. According to the Dos Hermanos review linked below, the head chef is Trish Hilferty, who's previously worked at the Eagle in Clerkenwell and the Anchor and Hope in Borough, among other places.

The food menu at lunchtime is fairly short, with six or seven options. On the February 2010 visit, this included a fine potato, chorizo and spring green soup (£4.50) photo, warming and hearty and served with a couple of thick slices of white bread with butter. Aside from the bar menu is a chalkboard with a few extra offerings, including a regularly-changing range of toasted sandwiches. Ewan tried the haggis toastie (£3) photo and was very pleased with it, packed with haggis and rather indulgent. A year later, ordering just before the kitchen closed on a Sunday, Ewan got a warming and hearty dish with roast pork and chorizo over a bed of polenta, pricy perhaps at £14 but very satisfying.