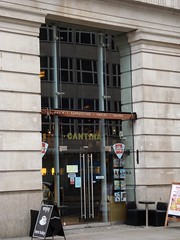 Cantina was a cafe, restaurant, and takeaway on Southampton Row near Holborn Station. It closed some time in late 2012. As of December 2012 it remains vacant with a stripped-out interior photo.

Cafe, restaurant, and takeaway on Southampton Row near Holborn Station.

Note: As of October 2012, secretlondon reports that Cantina may have closed.

secretlondon visited on a Sunday afternoon in December 2008. Although the opening times in the window state that it's closed on Sundays, it was certainly open at 4pm on the Sunday of my visit.

Inside, there are black tables and leather stools and benches. Dance music was playing.

They serve pizza, but it's the toasted fold-over kind photo. Although they were advertising all pizza and pasta dishes at £4.50, I was charged £5 for my pizza, and when I challenged this it turned out that the £4.50 offer was the takeaway price. A large latte was £2.