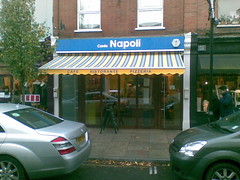 bob visited again in April 2009. I had the Pizza Forte again. This time the chillies were more noticable. Still a good pizza. They dont take Cards for payment currently.