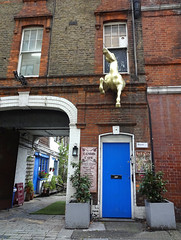 Cafe in Islington, round the back of Angel Station.

Tucked away towards the end of a cul de sac and accessed via a narrow winding staircase, this isn't a place that sees a lot of passing trade. The feeling of a secret hideaway is further enhanced by the low ceiling and exposed floorboards photo.

A long communal table runs down one side of the room, with smaller tables along the opposite wall. At the far end, velvet-upholstered chairs and a couple of sofas cluster around a coffee table, below the benign gaze of a reclining painted nude. Lighting in the evenings is dim, provided mainly by candles and fairy lights.

Kake visited on a Saturday early evening in January 2017. There were a fair few people in when I arrived a little before 5:30pm, though still a couple of small tables free and plenty of seats at the communal table. Music was playing very quietly.

I had a cup of rooibos and honeybush tea (£1.70) from the large selection of Pukka teas on offer, and a slice of gluten-free carrot cake (£2.80). The cake came as a generously-sized slice, and had two layers sandwiched with buttercream. It was very crumbly, falling apart at the slightest prod of a fork. The spicing was quite subtle, and the baking soda perhaps slightly too prominent.

According to signs seen in January 2017, alcohol is only served with meals, and they don't have WiFi.

Accessibility: The cafe is up two flights of fairly narrow stairs with a handrail on one side. There's no lift. The ladies' toilet is a floor down from the cafe, and the gents' is two floors down.