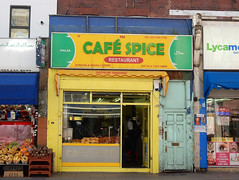 The decor is fairly basic, and firmly cafe-style. The entrance area is dominated by a glass-fronted counter, piled high with puff puff (fried dough), suya (cooked skewered meats), and meat pies. Past the rest of the counter is a seating area for around 25 people, and fridges at the back hold chilled water and soft drinks.

There's a menu of sorts on the wall, but to see what's on offer today one just needs to look at the counter with its display of meats, stews, rice, and staple foods such as pounded yam, amala, and gari. The meats include beef, cow foot, fish, chicken, and tripe, and meals are priced according to how many pieces of these you want — mixing and matching is encouraged. Stews include spinach with stockfish (dried cod), egusi (ground melon seeds cooked with palm oil and greens), and tomato.

Kake visited on a Thursday lunchtime in September 2015, arriving around 1pm. There were three or four other customers eating in during my visit, with several more popping in for takeaway.

I went for the smaller "meal" option (£9), which gets you three pieces of meat, a stew, and a staple food. I chose two pieces of chicken, one piece of tripe, egusi stew, and amala photo, and was also offered (and accepted) a ladleful of tomato stew for extra flavour . It was microwaved and brought to my table, served far too hot to eat immediately.

The amala was fairly soft, but still substantial enough to work well for scooping up the egusi stew. The stew itself was fine; made perhaps with a little less palm oil than many places use, and hence not overly oily but with a slightly flabby texture to the ground egusi seed. Unfortunately the chicken wasn't very good — it was breast meat, almost entirely skinless, and rather dry and uninteresting. The tripe was better, though — it was good-quality tripe to start with, with prominent honeycomb ridges, and it was cooked just right, neither chewy nor overly soft.

Accessibility: A large step to get in, and another step to the toilet.