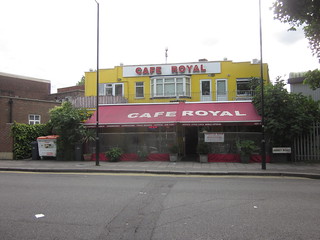 It's opposite Central Middlesex Hospital (which has several bus stops) and close to Asda. There are lots of seats inside: each table has 4 "bucket" seats attached to it. There are also a few seats outside (undercover) for people who want to smoke. It gets busier at lunchtime, but John has never had to wait to sit down, i.e. there have always been empty seats available.

At the time of writing (August 2013) the menu on their website is a bit out of date: they have some extra options in the shop, in particular a vegetarian breakfast (2 vegetarian sausages, fried egg, bubble, mushrooms, tomatoes, baked beans). There are other vegetarian options, e.g. omelettes. They also have a couple of vegan options (casseroles).

The café is open until 6pm on weekdays, but from 5pm onwards they will start tidying up if it's quiet. They will still serve you after that, but from 5:30pm onwards it's probably best to get a takeaway rather than eating in.

The café normally has a radio playing, tuned to Magic FM. It's not very loud, so you can have conversations without needing to raise your voice, but it may distract you if you want to read. They have a few newspapers available for customers to borrow and another set of newspapers available to purchase.

Accessibility: there's a small bump at the front door (about 1 cm high), then the whole café is on a single level inside, including the till and the toilets. You might struggle to fit a wheelchair between the tables or inside the toilet cubicle (based on the male toilets).