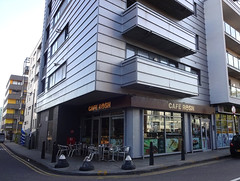 Indian/British cafe in Shadwell, quite near the station.

It's quite small, seating just 22 people at dark-varnished wooden tables with modern yet comfortable enough matchingly-varnished chairs. Large windows on two sides offer a view of Watney Market. A glass display counter runs the length of the room, showing off the (mainly chicken-based) sandwich fillings as well as cakes, muffins, and pastries. The hot food on the menu is a blend of British food (fried breakfasts, jacket potatoes) and Indian/Anglo-Indian options (spiced omelette, biryani).

Kake visited on a Wednesday morning in November 2016. There were half a dozen other customers when I arrived around 9:45am, and many more in and out for takeaways while I was there, several seemingly regulars. No music was playing, but there was a fairly loud hum from the drinks fridge.

I went for a spiced omelette (£3 including two slices of toast) photo. They warned me that this would take 10 minutes to prepare, but it was worth the wait. It was pretty tasty, with a decent level of spice, coloured with turmeric and studded with chopped tomatoes and red onion. Although thoroughly cooked to the point of browning, it wasn't dry. It came with two slices of ready-buttered toast (choice of white or brown), which was fine. A cup of tea ordered "very weak" came with the teabag on the side.

I ordered at the till, they brought it to my table, and I paid afterwards. No service charge was added, but there was a tip jar next to the till.

Accessibility: A very tiny step to get in, more of a ridge. Somewhat narrow spaces once you're in. No steps to the toilet, but it's quite cramped.