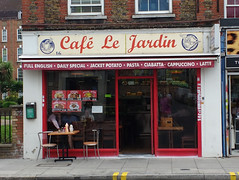 bob and four co-workers visited on a Friday in August 2017. There were around eight other customers when we arrived just before 1pm, and another half dozen turned up while we were there. We easily found seats at a long table for eight, and there was at least one other long table also available at the time..

bob had set breakfast 2 (£5.90) photo. This normally comes with a choice of tea or coffee, but I asked for a bottle of water and they didn't charge extra for this. I asked for the toast to be left unbuttered, and it did indeed arrive without butter. The yolks of the eggs were only slightly runny, but the hash browns and bacon were fine, and the sausage was OK for its style. The beans were plentiful.

One of our group had the Jardin special breakfast (£7.50), and they were happy to do fried instead of scrambled eggs. The person eating set breakfast 3 (£6.50) seemed to be happy enough, and the others didn't have any complaints about their jacket potatoes.