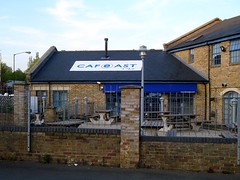 Vietnamese cafe/restaurant in the Surrey Quays shopping/leisure complex, near the cinema. Previously situated on Evelyn Street in Deptford, it moved to Surrey Quays in Spring 2009, with the original premises now housing another Vietnamese cafe, Mama Pho, run by another member of the same family.

In complete contrast to the old street-corner cafe, the new location is large and canteen-like, with bright lighting, hard echoey surfaces, and thin paper tablecloths. There's a small waiting area near the entrance, with a ticketing system used to control waiting times — it's very popular with students, and gets very busy.

Kake and friends visited on a Wednesday evening in April 2012. The place was full, but we had only a short wait for a table. Even though no music was playing, it was very noisy, with the full room and hard surfaces conspiring to make it a little difficult to hear one's companions.

Banh cuon (steamed rice wrappers stuffed with mushrooms and pork; £5.50) photo were fine, but bi cuon (pork skin rolls; £5.50) photo were fridge-cold and fairly flavourless. Goi cuon (summer rolls; £5) photo were similarly fridge-cold and also had an unusually low proportion of prawns and pork, with an increased quantity of vermicelli and lettuce used to bulk them out; they were also lacking in the fragrant herbs that might have gone some way to remedy their lack of flavour.

A main course of bun chay/vegetarian BCNTN (vermicelli with salad and vegetarian spring rolls; £7) photo was a generous portion, but the spring rolls were quite disappointing, with smooth wheatflour wrappers rather than the bubbly, crackly rice paper wrappers Kake had been hoping for, and a distinct flavour of tinned vegetables in the somewhat mushy filling. However, the com khau (marinated belly pork steak served on rice; £7.50) photo ordered by another member of our party was better-received, and certainly looked tasty.

Our final bill photo came to £51, or £12.75/head, including tea and water. No indication was given on the bill of whether it already included a service charge.

It's worth noting that as of April 2012 they are cash only and they don't serve tap water, only bottled mineral water. Also worth noting is that they close up and go on holiday for a month or so every year, generally around August/September.

Kake's verdict: I was a bit disappointed. I'd had the pho at the previous location (in 2007) and thought it was really good, so I'd been expecting the quality to be maintained. I didn't like the ambience in the current location half as much as in the old place, and the food on this visit wasn't good enough to make up for it.

Accessibility: There is step-free access, but this involves negotiating a very steep ramp and a sharp turn.

Getting here: On the map, Cafe East is on the corner of Redriff Road and Quebec Way; however, the frontage and entrance face west, across the carpark and towards the bowling alley and cinema. The photo on this page was taken from the carpark.