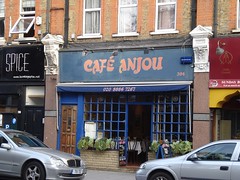 Cafe Anjou was a small, bistro-style neighbourhood restaurant in Palmers Green. According to a comment on London Eating (linked below), it closed some time in or before January 2010.

Kake visited on a Sunday evening in September 2008. Although I got there nearly half an hour before their official opening time of 6:30pm, the door was open and they were happy for me to come in and have a glass of wine while I waited for them to be ready - and indeed the chef came out of the kitchen after I'd been there only about five or ten minutes and said he could sort my food out right away if I liked, as he had a bit of breathing space while a batch of bread was in the oven.

Bread and butter arrived shortly after I sat down. The bread was good (and I'm fussy about bread, being a baker myself, and have no love for the stuff that normally passes for French bread here); very fresh, with a crackly, flavourful crust and soft but not doughy inside. The butter that came with it was unsalted.

I started with the assiette nordique (£6); four types of smoked fish served with green salad and citrus mayonnaise. I really enjoyed this; the salad was dressed with a lemony vinaigrette that worked well with the salty, rich, smoky flavours of the fish, and the mayonnaise was very light.

I had the sole vegetarian option for my main - aubergine farcie (£9); half an aubergine stuffed with mushrooms and toasted pine nuts, served with rice and tomato sauce. It wasn't bad; the aubergine skin was a bit tough, the rice seemed a bit "easy cook", and the dish didn't really seem very integrated, but it was edible and quite competently prepared. I suspect the meat/fish options are rather better, and I kind of wish I'd gone for the duck dish I'd been pondering.

Although some reviews warn that their side vegetable pricing policy is confusing, as of September 2008 this has been rectified, with the menu clearly stating that the charge is £1.75 per type of vegetable. Of the four choices available, I chose the mangetout, which were cooked just right.

Service was friendly, and I got the impression that the maitre d' would have been quite happy to chat with me if I'd felt so inclined (due to my early arrival, I was the only customer for about half of my stay). Music was playing throughout, though not too loudly - I suspect it might have been a Fleetwood Mac CD or something along those lines

My final bill included a 20% discount for vacating my table before 8pm; a policy which I think applies throughout the week.

Kake's verdict: I'd be happy to come back if I happened to be in the area.

Accessibility: One step up to get in; it's all level once you're in except for a very small step (more of a ridge) to get into the ladies' (gents' not checked).