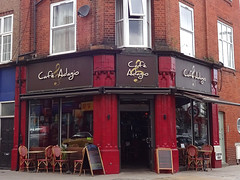 Cafe Adagio was an independent cafe in Addiscombe. It closed down for good in November 2018.

The decor is upmarket, with a stone-flagged floor and bentwood chairs. The walls play host to regularly-changing exhibitions of original art, most of it for sale, and often by local artists. Pot plants sit here and there, and a rack on the wall holds a selection of travel guides. They have live music and open mic nights at the weekends.

Although they used to do a fairly standard cafe menu, as of September 2018 the food options have been simplified and now consist of sweet and savoury pies/bakes/cakes/etc supplied by Lizzie's Bakery. The selection is all displayed at the service counter, and changes from day to day, but savoury examples include Thai chicken pie and spinach & feta quiche.

Kake first visited on a Tuesday morning in August 2016, in the company of Pippa. There were a couple of other customers when we arrived a little before 9:30am, and others came in and out while we were there, many seemingly regulars. Chill-out music was playing, not too loud. The situation was similar on a Wednesday lunchtime in September 2018.

In August 2016, smoked salmon symphony (smoked salmon and scrambled eggs on a bagel; £5) photo was OK, though the eggs were a little dry and overcooked for Kake's taste. Tea (£1.50) came in an ornate metal teapot photo, large enough for two people.

In September 2018, homity pie (cheese, potato, and leek; £5 plus £1 for salad) photo was pretty good. The pie was filling without being heavy or stodgy, and flavoured with plenty of black pepper. The pastry was fairly soft, and hence didn't suffer too much from being microwaved. The salad was decently prepared, but rather drowned in the bottled dressing.

Service was very friendly on both visits. It was a little scattered on our first visit — tea had two teabags left in despite being ordered "very weak", they forgot to bring milk for the tea, and the scrambled eggs arrived with a fork but no knife — but perfectly fine on our second.

They have free WiFi — ask staff for the network name and password.

Accessibility: No steps to get in. Step-free throughout, though access to the toilet is narrow (and through the kitchen).