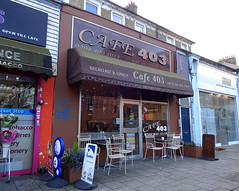 It has two levels of seating; one at ground floor level (about 18 seats, all fixed-position) and one down some steps.

bob visited on a Friday lunchtime in March 2008. There was a TV on showing the news.

There was only one set breakfast, so I went a la carte with egg, bacon, black pudding, tomatoes (fresh, fried), chips, and tea, which came to £5.70 photo. It was all good except the sausage, which was just your standard greasy spoon mystery meat version. The black pudding in particular was very good.

They also do food other than breakfast food, most if not all of it fried, e.g. scampi and chips.