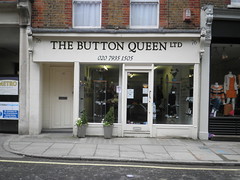 Button shop in Marylebone. It was previously located at 19 Marylebone Lane photo, but moved to number 76 in March 2009; the old building was demolished and replaced by a new-build (which as of mid-2012 is occupied by 28-50).

Antique and modern buttons, lots of really unusual ones too. Reminds me of how John Lewis's button section used to be.

The staff in there are very helpful - they have a lot more buttons in boxes behind the counter than are out on display (the display ones seem to be mostly the rare/special ones). When I was in there I showed the chap a scrap of the fabric I had, and after some to & fro with various boxes, he produced some lovely buttons that I wouldn't have thought of by myself but that were perfect. (Juliet)