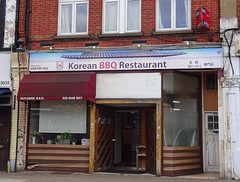 Northern Steve and Amy visited on a Tuesday evening in February 2011. Service was friendly. We were uncertain of what to order and the waitress was happy to talk us through the menu and make recommendations

We ordered one starter, two BBQ meats and random sides. With drinks the bill came to just over £50 for the two of us.