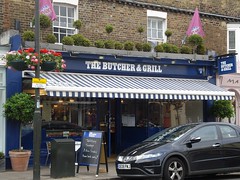 The Butcher & Grill was a butcher's shop and steak restaurant in the Wimbledon Village area of Wimbledon. According to Google Street View, it closed down by May 2014.

Butcher's shop and steak restaurant on the High Street in the Wimbledon Village area of Wimbledon. They also have another branch in Battersea (see Fay Maschler's review and Time Out review).

The butcher's section is at the front, with various cuts of meat displayed under glass and a butcher on hand to sell them to you. This leads into the bar area, which also has shelves stocked with jars of sauces, stocks, etc for sale. At the back is the restaurant itself — a rather larger area with booths along one wall, freestanding tables throughout the rest of the room, and a semi-open kitchen behind a chest-high serving pass at the back.

Kake, bob, Martin, elvum, and Northern Steve visited on a Thursday evening in January 2009. We hadn't booked, but there was plenty of space. Decent enough bread (fresh and warm) and butter arrived moments after we sat down, and the requested jug of tap water arrived quickly after.

We started with rabbit and chicken terrine, bacon-wrapped scallops with cauliflower, and pork belly. Kake's scallops (£9 for three) were fine, though the bacon added little except saltiness.

We all went for steaks for our main course. Confusingly, Kake was given a completely different steak knife to everyone else, and when we asked it turned out that there was no culinary reason behind this; unlike other places which have actually moved into the 21st century, the Butcher and Grill has "ladies' knives" and "men's knives". Utterly bizarre. Martin and bob shared the rib for two (£48), and the rest of us had rib eye (£16.50 for 10oz), sirloin (£17.50 for 10oz), and fillet (£21 for 7oz). Note that all these prices included chips and sauces. We also shared some sides; brussels sprouts with bacon (£2.75), grilled mushrooms (£2.75), onion rings (£3), and spinach (£3.50).

The steaks were all good; decent meat, cooked competently and as requested. The chips were OK. Among the sides, we liked the sprouts, which were cooked perfectly and with just the right amount of bacon, and the spinach; Kake felt the onion rings were a bit greasy, though they were at least actual rings of onion coated in proper batter. The sauces, however, were puzzlingly incompetent; the peppercorn one had actually split, with unappetising globules of butterfat separated out from the failed emulsion.

Desserts will have to be commented on by those who actually had them. Kake's cheeseboard (£7.50) of "British cheeses" actually contained Stilton, Brie, and Camembert — although British versions of Brie and Camembert do exist, our waiter merely laughed along with the joke when we pointed out that this was a little surprising, so we still don't know the actual provenance of these. The cheeses were served too cold (and the board they were served on was also cold, suggesting pre-assembly), and the rind of the Brie had dried out a bit.

Service was a little odd, in general. One of our waitstaff was completely impassive and almost robotic, seeming impervious to smiles, eye contact, and expressions of thanks — but then she may have just been having a bad day. The other staff member who served us was much friendlier and more welcoming, but a little awkward; passing plates across the table instead of walking around it, leaving all the sides abandoned on the pass while he carved Martin and bob's shared rib-eye, and needing to go and ask what was on the cheeseboard (understandable if your cheeseboard contains 20 cheeses, baffling when it contains three). Finally, there was no offer to decant our port, and the bottle had been handled carelessly enough that residue appeared in the very first glass poured. They did do one thing notably right; although we stuck to the same wine all evening, a fresh glass was produced for tasting each new bottle.

Kake's verdict: I need to explore the rest of the area to decide how good an option this place is in context. I wouldn't come to Wimbledon specifically to visit it.

Accessibility: Step-free access to butcher's shop and restaurant, via a couple of ramps. Toilets are up a narrow flight of stairs; not sure if there's an accessible toilet too.