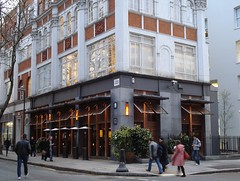 Like the other branches (in Soho and Marylebone), the decor focuses on darkened wood, lots of wooden panelling on the walls, and predominantly large tables which seat 3 people along each side on small benches. There are coat hooks on the walls for coats, as there's not an excessive amount of space on the benches.

It gets very busy at lunchtimes and in the evening, but they don't take bookings so you may have to queue. However, as they sit you wherever there's space, the queue moves fairly quickly at most times. This is the only branch that allows you to book in advance for large parties, as they have (at least one) bookable room downstairs towards the back of the restaurant.

There are a few dishes across a number of basic categories, such as 'Wok Noodle', 'Rice' and 'Curry' dishes. There are vegetarian options for most of these, as well as plenty of side dishes. There's a small wine selection as well as 'homemade lemonade' (which is very nice, with hints of ginger in it) and similar concoctions.

The food is excellent and we did not have to wait more than 15 minutes for it, though one of our group got her meal before the others (I believe they bring it out when it's ready, as per Wagamama). The duck curry (£8.90) was adjudged by Sarah to be excellent, with large chunks of meat, well-cooked. Ewan's Pad Thai jay (vegetarian Pad Thai, about £7) came with a slice of lime and some satay on the side. It was delicately flavoured, but very tasty, with lots of sticky noodles. In the centre of the table was fish sauce, hot chilli sauce, and soya sauce.

On the side, Ewan had the Thai roti (of which there were two good-sized ones on a plate), which were nicely dry and flaky, while Sarah had the calamares, which she raves about (though on this visit they were less crispy than usual).

This branch at least (not sure about the others) has a slightly gimmicky info screen photo on the external wall, so passers-by can peruse the menu by pressing buttons.