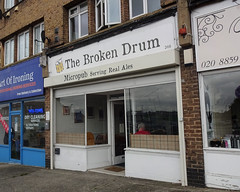 Micropub in the Blackfen area of Sidcup, in the Good Beer Guide.

It's named after the first pub mentioned in Terry Pratchett's Discworld series: the Broken Drum (later known as the Mended Drum), and the owner is a Pratchett fan himself. A small bookcase in one corner of the pub holds several Discworld paperbacks as well as the non-Discworld book in which the Broken Drum was first mentioned — ask the owner, and he'll show you which one.

Like most micropubs, it's a small single-room shop conversion with a service counter in the corner and a side-room cellar where ales are poured on gravity. Refreshingly, all the seating is provided by normal-height chairs and tables, along with a couple of banquettes at the front, rather than the usual micropub system of high chairs and tables.

Kake visited on a Tuesday afternoon in September 2016. Arriving just after the weekday opening time of 3pm, I was the only customer throughout my visit, but I had a good chat with the owner about Pratchett, CAMRA, and pubs in general. No music was playing, as is usual for micropubs.

There were three real ales on, all at £3/pint (Reunion Opening Gambit, Canterbury Ales Light Red Session, and Dartford Wobbler Guinea Guzzler), as well as two real ciders at £3.60/pint (Turners Dry and Dudda's Delight Apricot). My half of Light Red Session was well-kept. A board on the wall photo listed the three ales coming next.

Food is limited to bar snacks such as sausage rolls, pork scratchings, and so on photo of list.

According to a sign seen in September 2016, children are permitted until 8pm, and dogs are allowed on a lead (and water and snacks are provided for them).

Accessibility: A tiny step to get in, and no steps once you're in.