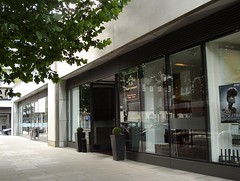 Ewan, Kake, Kerry, and two friends visited for a Sunday dim sum lunch in August 2013. We'd booked in advance, and were placed in one of their two private dining rooms. Hot towels were provided straight away, along with small dishes of edamame and marinated cucumber photo (which happily didn't appear on the bill).

Our table was fairly large for the five of us, a nice change from the usual Chinese restaurant system of jamming as many chairs around the table as possible. Music was playing throughout the restaurant, perhaps slightly louder than ideal, and not particularly relaxing.

We asked for a tea menu, but after some faffing with a general drinks menu our server finally decided that they didn't have one. We ended up with a fairly delicate oolong, listed as ginseng oolong on the bill. The tea cups were British-style with handles, and the staff were in and out of our private room throughout our meal to make sure we never had to pour our own tea.

We ordered a couple of rounds of dim sum, plus a cold dish (five-spice beef) from the main menu. The first round arrived soon enough; the second took longer, though not long enough to be annoying, and the staff apologised for the wait, explaining that we'd hit peak time and the kitchen was very busy.

Five-spice beef (五香牛腱肉; £7 on the menu, £9.50 on the bill) photo was good, with plenty of depth of flavour and good texture.

Xiao long bao (上海小籠包; £3.60) photo were disappointing; the skins were too thick and a touch undercooked, and there wasn't all that much soup inside. Scallop siu mai (帶子燒賣; £3.90) photo were OK but nothing special. Har gao (水晶蝦餃皇; £3.60) photo were fine. Prawn and chive dumplings (鮮蝦韭菜餃; £3.40) photo were lovely, with plenty of flavour from both prawns and chives, and we wished we'd ordered a double portion.

Chilean sea bass rolls (智利鱸魚卷; £5.90) photo were good, with the fish retaining a good texture and not overcooked. The broth had a little chilli bite without being overly spicy.

Deep-fried almond prawn balls (杏片百花蝦球; £3.90) photo were excellent in concept: prawn paste wrapped around a savoury liquid broth centre and coated with sliced almonds. The individual components of these were all fine, but overall the pieces were just too big, taking several bites to eat. Shredded turnip cakes (干絲蘿蔔酥; £3.80) photo were slightly greasy, but the turnip filling had great flavour and texture.

Cheung fun with XO sauce (XO醬煎蝦米腸粉; £4.20) photo was a little too sanitised for the taste of some of our party — a lack of "wok hei" was mentioned — but the cheung fun themselves were nicely silky with no stodginess, and the XO sauce was well-flavoured.

Mini glutinous rice in lotus leaf (迷你糯米雞; £4.20) photo was disappointing; the rice itself was undercooked, and the overall flavour was very bland. Preserved egg and pork congee (皮蛋瘦肉粥; £5.20) photo was fine, though some of the pork was a little too chewy, and it came with the chopped doughsticks already in, so they got soggy. Egg custard buns (公主奶皇包; £3.20) photo could have done with more custard, but were otherwise OK.

Our final bill photo was £22/head excluding alcohol but including tea and service (we realised later that there were some minor mistakes on the bill, but not enough to significantly affect the total cost). Service was very attentive in general, bordering on hovery at times, but mostly not too intrusive.

Accessibility: No step to get inside, and there are a few tables on this level, but there's a step to get to the private dining rooms, the toilets, and much of the rest of the seating. The journey from the private rooms to the toilets is a bit of a faff and involves crossing the path of the staff carrying dishes from pass to diners.

Kake's verdict: Too many "misses" for me; I'd not prioritise a revisit over other places in the area.