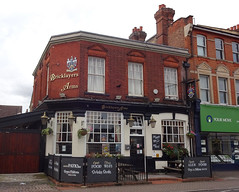 The decor is fairly traditional, but on the clean and open side, with enough windows to let in plenty of natural light. Upholstered banquettes line the walls around the horseshoe-shaped bar, which has four handpulls for real ale. The floor is dark wood, and the walls are half-panelled. There are at least two flatscreens in this front part. Another room further back has more seating, and there are also some picnic benches under umbrellas along the side of the pub.

Kake visited on a Friday afternoon in October 2011. There were a fair few people in, and plenty of conversation going on. Three real ales were available: Harvey's Sussex Best (£1.60/half), Sharp's Doom Bar, and Young's Special.

They used to do food, but as of December 2017 they no longer do, though according to an email from the manager they're happy for people to bring their own in.

(In October 2011, Kake had the tuna sandwich (£3), which was basic but well-executed, with nicely shredded lettuce and onion in the side salad along with properly sliced cucumber and tomato. There was perhaps a little too much margarine on the bread, but this is a minor quibble.)

Accessibility: A step to get in. No steps to the ladies' once you're in (gents' not checked).