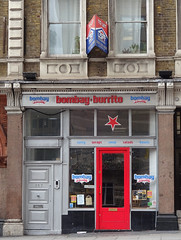 According to their Facebook page, Bombay Burrito opened in December 2012. Although burritos and curry may not sound like a happy combination, the replacement of beans with chickpeas (and sour cream with raita) seems completely logical once you're ordering.

The setup is similar to other build-your-own burrito chains such as Benitos Hat or Chilango: you order at the counter, choosing a filling (chicken, lamb, paneer, dal vadas photo), a sauce (the selection changes but expect korma, tikka masala and jalfrezi) and your toppings (onions, lettuce, raita, chillis, coriander). Instead of tortilla chips, bags of poppadom pieces are available by the till. As of a March 2018 visit, there were also two vegan specials advertised behind the counter.

The decor features brightly coloured murals of Bollywood film stars. It's airy and clean, with a handful of small tables for those wishing to dine in and watch the passing traffic on the ring road. By the till there is a lovely and definitely-not-photoshopped picture of the Queen enjoying the delights that Bombay Burrito has to offer.

They serve a selection of craft beers with a slight markup (£1-3).

Kat visited on a Friday evening (around 6pm) in March 2018 with two friends. We were the only customers. The dal vadas palak burrito (£5.50) with extra onions and raita was pretty good and mostly kept its structural integrity; I'd have another one.

Kat's verdict: I would definitely return if I was in the area and needed a quick bite to eat on the way to/from somewhere nearby.

As of March 2018 the website advertises a 10% student discount.

Accessibility: a low step to get in, toilets are downstairs.