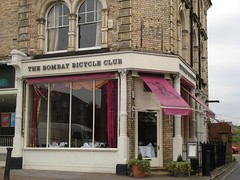 Bombay Bicycle Club was an extensive chain of Indian restaurants (in Hampstead and Holland Park) and takeaway delivery sites (all over London). The chain went into administration in 2011, and according to Google Street View the Balham branch was closed by August 2012. As of July 2016 the site is occupied by a kitchen furniture shop called Roundhouse.

The original restaurant in Balham of this now-extensive chain of Indian restaurants (in Hampstead and Holland Park) and takeaway delivery sites (all over London).

Note: The Bombay Bicycle Club chain has changed hands at least once since our visit, and reports as of August 2010 indicate that quality has dropped. The comments below were current as of April 2008.

On Ewan's Thursday evening visit in April 2008, there was no problem getting us a table at 7:30pm, though the place was by no means empty, and only filled up throughout the evening. Service was prompt and friendly, and poppadoms were placed before us almost before we had sat down. Although there was a charge for these and for the chutneys provided as accompaniment, they were well worthwhile, among the best I've had, and the chutneys were of a high quality, with an excellent lime pickle in particular.

For mains we shared two of the curries and two side dishes, with a naan, paratha and rice (for two) between the three of us, which was sufficient for our appetites (though might not have been for those hungrier). The vegetable dopiaza (£8.50) and daal saag (£6.50) were both fine, with the former particularly excellent. On the side, the shahi bagyan (aubergines, £4.50) were lovely, small, almost whole aubergines and nicely spiced, and the bindi sabzi (also £4.50) great if you like okra. The breads were both lovely, and the naan none too stodgy (as it can be at times at other Indian places).

In all, food was excellent, and the wine also uncommonly good (a Montepulciano d'Abbruzzo — all dishes on the menu come with wine recommendations) and good value at £13 a bottle. Would definitely return again.