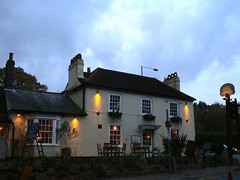 Now closed; was a pub/restaurant/bar near Harrow Weald Common in Harrow, part of the Blubeckers chain.

As of mid-2010, the premises are occupied by a restaurant called simply the Hare. The August/September 2010 issue of the London Drinker magazine reports that although the Hare has two real ales, it's not possible to come in just for a drink, and you must have a meal too if you want beer.

The information below is retained for people who want to know what it was like as Blubeckers At The Hare.

Pub/restaurant/bar near Harrow Weald Common in Harrow, part of the Blubeckers chain.

Kake visited on a Tuesday evening in October 2008. It was pretty much empty when I arrived shortly before 5pm, with just one family group finishing an early dinner.

I'm not entirely sure whether to call this place a pub or a restaurant - it's marked on Streetmap as "Hare PH" (public house), yet the Blubeckers website refers to their properties as "restaurants". The tables were all laid with wine glasses, cutlery, and linen napkins, but the barman said it was perfectly fine to come in just for a drink and that I could sit anywhere - though I chose to sit in the "bar area" to the right as you go in (this is pretty much the same as the rest of the place, except that the tables are smaller and arranged in two lines).

They have three taps on the bar, with unexciting things like Boddingtons (and no Strongbow). However, they had bottles of Pride in the fridge at £3.35, so I had one of them. They seem to have a number of wines by the glass, so that would also be an option.

The decor is actually fairly nice, with Klimt prints on the walls. Music was playing, not too loud, and not as cheesy as one might expect from a chain pub/restaurant.

They serve food, of course, and the (chain-wide) menu is viewable as PDFs on their website.

Accessibility: Step-free to get in, and there's an accessible toilet (which I can confirm was in full working order because I couldn't find the ladies).