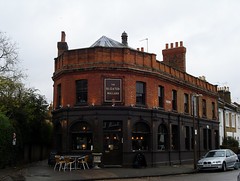 The Bloated Mallard was a pub opposite Teddington Station. It has now closed and been replaced by another business (also a pub) called The Railway; see Teddington Town article and Flickr photoset.

According to Richmond & Hounslow CAMRA, the Bloated Mallard closed some time around July 2012 due to "Enterprise Inns increasing the rent making the pub unviable for the tenant", but then reopened on 3 August the same year under "contract management". The same source reported in April 2013 that the pub had changed hands again, and would be closed temporarily for refurbishment before reopening, probably under a new name. The June/July 2013 issue of London Drinker magazine noted that it had been acquired by Handmade Pubs Ltd and would be called The Railway when it reopened.