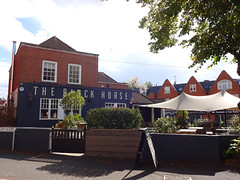 Pub on the Kingston/Norbiton border.

It's fairly large inside, but the space is broken up with wood-and-etched-glass room dividers to give several different areas, including a cosy sofa-and-armchair corner and a games room with a dartboard, table football table, and a selection of board games photo. Tables are wooden, varnished, and mismatched, each topped by a small bunch of flowers in a bottle-style vase.

There's plenty of outdoor space, too, with large beanbags as well as more conventional seating, all sheltered from the busy road by rattan-style wooden screens.

Kake and bob visited on a Bank Holiday Monday afternoon in August 2017. There were quite a lot of people in when we arrived a little after 3pm, though most of them were enjoying the sunshine in the garden, so there was plenty of room inside.

Five of the six handpumps were on, offering Harvey's Sussex Best, St Austell Proper Job, Park Brewery Gallows Gold (£6.10 for a pint and a half), Twickenham Naked Ladies, and Weston's Rosie's Pig cider.

In August 2017, Kake and bob tried the potted ham hock with croutes and shallot chutney (£7) photo. The ham hock had a decent flavour and texture, but was rather saltier than ideal, and there weren't enough croutes for the size of the portion. The shallot chutney was good, not too sweet and with the shallots retaining some texture. Cutlery and napkins arrived in a faux-vintage condensed milk can (helpfully labelled "Made by www.replicavintagecans.co.uk" along the seam).

According to a flyer seen in August 2017, quiz night is Monday.

Child-friendliness: They have at least four high chairs (the type with no tray and very little back support). There were several children in during our visit. The ladies' toilet has a small stool to help children reach the sink (gents' not checked).

Dog-friendliness: There were several dogs in during our visit, and indeed a dog show going on in the garden. A dog snack station photo had been set up near the entrance, though this may have just been for the dog show day.

Accessibility: Step-free to get in via a slightly convoluted route starting around the side of the pub and winding through the beer garden with one not-too-steep ramp. Step-free to toilets once you're in. Some of the interior seating is on a dais.