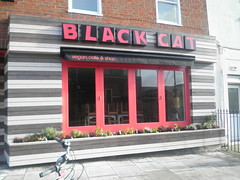 Like its previous incarnation, there is a small selection of cookery and vegan lifestyle books. The atmosphere is less politically charged, but there are still animal rights and other political leaflets, including one entitled "Kittens" (a tract about Marxist thought on capitalism illustrated with photographs of kittens) available alongside free newpapers.

There are two chillers with a small selection of vegan drinks, and one for take away groceries stocked with sausages, cheeses and other goodies. The cafe is bright and airy, and the sofas have been replaced with basic wooden tables, creating more seating space. Free wifi is available.

Bec visited in late September 2013 shortly after it reopened, and sat for an hour or so with a friend over a basic tea (£1). Soya, almond, rice, and oat milk were available. The cafe was pretty quiet and like at the Pogo cafe, there was no rush to move us along.

On a busier afternoon visit in November 2013, the weekend breakfast menu offered a "fry-up" version including tofu scramble, mushrooms, sausage, bacon, home fries, grilled tomato, and beans (£7) and a "healthy" version with porridge and fruit, though the menu was being taken down for the evening meals as I ordered. The menu varies from day to day, featuring a selection of standard salads, burgers and soups.

I ordered a carrot cake with vanilla cream (£2.50) photo. It was dense and moist, with excellent vegan cream that was not overpoweringly sugary. I also had a hot chocolate (£2.30), a bit pricey for the size but indulgent and delicious.

I returned in late November 2014 to sample the fry-up breakfast and asked for the pancake option (instead of toast) and with no mushrooms - no substitutions were offered but the portion was so generous, it didn't matter. Steve ordered the same but opted for toast; he seemed to get a bit of vegan black pudding as well. Everything was delicious but the home-made baked beans have almost ruined me for the completely acceptable tinned beans most places offer. Their recipe was saucy but not sloppy. It's worth getting the fry-up for these alone but everything else is fantastic and excellent value for money.

Bec's verdict: The cakes are gorgeous and the breakfast is excellent - worth making the effort to visit.

Child-friendliness: One highchair available and free nappy wipes in the toilet.

Accessibility: One small step to get in; step-free throughout. The toilet is step-free but very cramped.