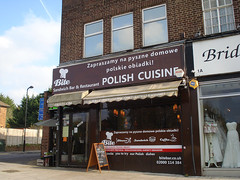 Polish food is served from noon onwards; it's sandwiches only before then. It's also fairly casual; you order and pay at the counter. The menu warns of a minimum 15-20 minute waiting time for main courses (30-40 minutes on Sundays).

The decor is relatively smart, though showing scuffs and scratches here and there. Cylindrical lights in shades of sand and ochre blend nicely with the dark wood effect chairs and tables, light brown floor tiles, and walls painted in contrasting creams and dark browns.

Kake visited on a Thursday lunchtime in November 2014. There were a couple of other customers when I arrived around 12:15pm, and a few others called in for takeaway sandwiches while I was there. Vaguely poppy music was playing on the radio, not too loud.

I went for the potato pancake with goulash (£7.90) photo and a medium cup of tea (£1.30). As noted on the menu, it took around 15-20 minutes to arrive, which seemed reasonable. The pancake was a little greasy, and a little underseasoned; it was also inconsistently cooked, being slightly underdone in the thicker parts and verging on burnt around the edges. The goulash was fine, if a bit gloopier than ideal. The accompanying salads were coleslaw, red cabbage, and leeks and carrots in mayonnaise, all of which were fine.

No service charge was added to the bill, but there was a tip jar on the counter. Service was friendly.

Child-friendliness: They have at least one high chair, Antilop type.

Accessibility: A small step to get in. Tables are relatively widely spaced. No further steps to toilet, and the cubicle door opens outwards, but the cubicle itself is a little cramped.