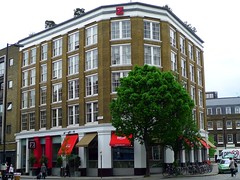 Bistrot Bruno Loubet was a bistro run by celebrated French chef Bruno Loubet, attached to the Zetter Hotel in Clerkenwell. It closed down in April 2015.

The restaurant space inside is open and brightly-lit, with windows around all sides of the building corner space. There's also a good view into the kitchen area itself. There are a few steps up to a reception area, where some sofas are available for waiting and a maître-d' is quietly efficient.

Tables are set with thick white tablecloths and all dishes are presented on unfussy white plates. The food itself is very good quality, from a short but nicely-chosen menu photo of menu in April 2010. Complimentary bread is brought out after ordering, served in a small flower pot photo, tasty, warm and clearly freshly baked, though let down slightly by the butter.

Ewan's starter of the guinea fowl boudin blanc with leek fondue and chervil sauce (£7) photo revealed a beautifully light and fluffy sausage. Mauricette snails and meatballs with royale de champignons (£8) photo gained my friend's approval. The mains are substantial, and there are daily specials from which I chose a rabbit with new season asparagus (£16) photo, colourfully presented and very tasty, the meat coming off the bone easily. My friend's quail and pistachio Dodine with spinach and egg yolk raviolo (£18.50) photo was also excellent.

A pudding of apple and quince mille feuille with chilled orange blossom sabayon (£6) photo was eye-catching if a little disappointing to me, though my friend's cheese selection (£3 per cheese) photo included a creamy goat's cheese presented like a little ball of sorbet. Extra bread was happily provided.

There's a fine drinks list, with some house cocktails called 'infusions' (such as the Provence infusion, a wonderful and summery aperitif photo). A good length wine list allows some to be ordered by the glass or in 500ml carafes. Special mention must be made of the potent and expertly made espresso martini photo.