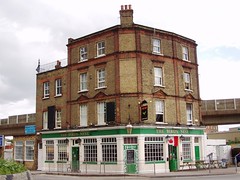 Small pub in Deptford, on the corner of Deptford Church Street and Creekside.

It's a little cramped inside, with a rectangular bar in the middle of the main room, space for bands to set up to one side, and seating squeezed in around all this. A separate room to the back, up a couple of stairs, holds the pool table.

Kake and bob visited on a Saturday early evening in September 2008. There was a drumkit set up for later, but neither the live music nor the crowds had arrived yet. Music was playing on the jukebox. They didn't have any handpumps, but they did have real ale in bottles; Bishops Finger, Black Sheep, and something else (all £3/bottle).

According to their website (as of September 2008), they have short plays on Tuesdays, plus open mic and open deck evenings, and live music four nights a week.

As of early 2014 they now do food and have at least one handpump for real ale.

Accessibility: Steps to get in at the side entrance; shallow step up and down at the front entrance. Quite cramped and crowded with furniture once you're in.