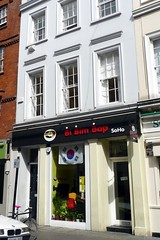 Korean restaurant on Greek Street in Soho, specialising in dolsot bibimbap — a dish of mixed rice and vegetables/meat/seafood, served in a hot stone bowl to crisp up the rice.

It's cafe-style in design, with plain painted walls covered with small polaroid photos of their customers, cutely arranged in a heart shape. There are a dozen seats at small square tables towards the front by the window, a dozen more on tall stools at a counter running along one wall, a couple of booths at the back, and more seating in the basement.

As mentioned in the London Korean Links review linked below, Bibimbap Soho (or Bi Bim Bap SoHo as the signage on the front prefers to capitalise it) appears to be aiming to provide an accessible way into Korean food for people unfamiliar with the cuisine, or easily daunted by large menus. The core of the menu photo as of September 2011 is ten types of dolsot bibimbap, each with the option of adding a fried or raw egg, or having brown rice instead of white (all these come at an extra charge). There are also a few noodle dishes and side dishes/starters available, such as japchae (glass noodles with vegetables) and kimchi pancake.

Kake, Ewan, and Alice visited on a Monday lunchtime in September 2011. There were a fair few people in when we got there at 1pm, distributed around the various areas of the restaurant. Music was playing, not too loudly.

We all went for various dolsot bibimbaps — kimchi bibimbap (£6.45, with an extra £1 for a raw egg to cook by mixing in the hot bowl) photo, chilli chicken bibimbap (£7) photo, and tofu bibimbap (£6.45) photo. They were all pretty good. The tofu was well-executed; deepfried to give a good texture, but not too greasy and not overfried to the point of hardness.

Sauces were provided in squeeze bottles, described to us as "chilli sauce" and "miso sauce", but (again as London Korean Links point out) these seemed to actually be the Korean versions of these, gochujang and doenjang. Tea was £1, and refilled on request. Service was brisk rather than solicitous. No service charge was added to the bill.

Kake's verdict: I'd happily come back if I was in the area and wanted a quick lunch.

Accessibility: A step to get in. Toilets are in the basement, down a flight of stairs with a handrail on one side.