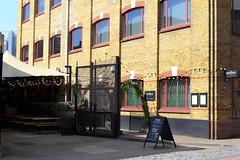 Cafe, bar, and restaurant in Bermondsey, near the southern entrance to London Bridge Station. It doesn't accept cash, only cards.

Described on its website as being located "in a former underground car park", it does indeed have a utilitarian look, with brickwork walls painted in a "distressed" style, an unfinished floor, and ducting stretching across the ceiling. Stylised "bare bulb" lighting hints that some or all of this is a refit rather than the original features.

Rectangular tables are arranged in tightly-packed long rows, each ready-laid with water glasses and cutlery and separated from its neighbour by just an inch or so. Seats are low-backed and comfortably padded in brown pleather. An open kitchen sits behind a sturdily-built wooden bar/service counter along one wall.

The menu is branded as "Donnelly's at Bermondsey Bar & Kitchen" and the website describes said Donnelly's presence as a "residency", but according to a member of staff in April 2019 the chef has no current intention to move on elsewhere.

Kake visited on a Monday morning in April 2019. There were about a dozen customers when I arrived around 10:45am, spread around the large space, and there was no problem finding me a table by the window. No music was playing, but there was plenty of conversation, amplified by the somewhat echoey space.

Scrambled eggs with grilled tomato and sriracha on sourdough toast (£6.50) photo was nicely-presented, topped with sprigs of watercress for extra colour. The toast was somewhat inconsistently toasted, being well-browned at one end and only gently warmed at the other, but the bread had a good flavour and crumb. The tomato had a nice char from the grill. The eggs themselves were also good; soft and not at all dry, with a well-judged amount of sriracha.

Earl Grey tea (£3) was good quality, with a pronounced floral scent, and served in a generously-sized pot which stayed warm.

Service was helpful but a little slow at times. A 12.5% service charge was auto-added to the bill.

Accessibility: A couple of steps to get in at both entrances, and another step to each toilet.