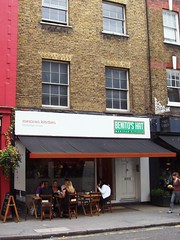 Mexican food on Goodge Street, next to the One Tun, one of a small chain of three. Unlike some other branches, this one doesn't do coffee.

This cafe is a simple operation aimed primarily at a lunchtime crowd and those looking for quick, tasty food, rather than the full sit-down restaurant experience. The food is prepared by an assembly line, much like at Subway, with different people handling different parts of the process, and it all moves along very quickly. There is seating inside, both stools along the window and close-set tables around the back seating around 20 diners, as well as a single larger booth seating 5-6 people.

At the counter, the menu splits into four basic options: burritos, tacos, salad, and soup. The first two options have choices of filling (steak, chicken, pork or vegetables), and there are additional fillings (rice, black beans, guacamole, et al.), most of which are included in the price. Finally, there are three salsas with differing levels of hotness photo of menu in June 2009.

Drinks and extras (such as nacho chips) are also available, though they give you a handful of these if you're eating in. They have a short cocktail list, including the ubiquitous margarita and variations, for around £6.50 each as of June 2009.

Ewan visited in June 2009 and had a fine burrito in a slightly doughy tortilla, with plenty of filling and packed with taste. The medium-strength salsa was hardly overwhelming, but the hot had more of a kick to it.

secretlondon visited in January 2012. I had a burrito with steak (£6.40) and a can of diet coke (£1). My burrito might have been nicer if they'd given me the toppings I'd asked for — it had no cheese, salsa, sour cream etc. The server had poor English, but I didn't realise how little she'd understood until I'd started to eat it.

secretlondon's verdict: I'd heard great things about this place but found that it was less good than Tortilla, which is a similar model. Not impressed.