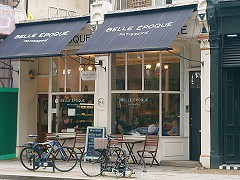 A French-themed café on the north side of Newington Green (Islington/Hackney borders).

The front part of the café has the counter with its display cases, and seating for about 15, all at quite small tables. There is a pleasing view across to the actual green of Newington Green — you feel you're in Paris. Up a short flight of stairs is the back room with about 20 seats, at larger tables, with a view through French windows to a sizeable back patio which I hope is available when it's warm and dry. Also, out on the pavement at the front are a couple more tables, presumably for smokers (though no ashtrays). All the seating is wood (chairs and a few benches), and the tables have mostly wood surfaces (some marble) with solid iron decorative legs.

There's a threshold mosaic spelling out "BELLE EPOQUE PATISSERIE" photo. In the front part the walls are mostly a light grey colour, with posters etc. mostly echoing French themes, some evoking the Belle Époque era. The walls in the back part are a light orange, and have artworks that are possibly for sale.

They do a variety of pastries ("viennoiserie", as the menu has it, including French staples such as croissant, pain au chocolat, brioche), cakes, some light salad meals, croques etc. They also sell a variety of breads and French produce: cheese ("artisan cheese directly from France"), tins of meat products etc. Photos of menu: p2-3, p1, p4

Rowley Birkin QC visited three times in October 2019. First on a late morning on a very wet Saturday when it was almost full, and I was lucky to get my own table. People continually came and went, and at times people were sharing their own small tables with strangers. The next visits were early afternoon on a Friday, and early on a Saturday, when there were 10-15 other customers. I have had a croque monsieur (came with an extensive salad, photo); the salad was good, but I wasn't convinced with the croque which became a bit soggy after several minutes. Otherwise, I've had a plain croissant, an espresso and an Americano (all OK). There was piped music, but at a lowish level.

Belle Epoque is now a small chain, with other outlets in Upper Street and Selfridges, though it seems to feel and operate as a small, local café. The Newington Green pâtisserie is the original, opening in 2000, and showing its age: there is a slight smell about the place (as if needs a deep clean or something), some walls are a bit marked, an electrical socket secured with duct tape, that sort of thing. However, overall I really like the place — I just feel generally comfortable.

Accessibility: There's a step (10 cm) to get in. The toilet is up three steps, then down three more steps with a couple of twists and turns; inside there are none of those grab bars or alarm on a cord, and the hand dryer is high up and wonky.

Child-friendliness: There's a baby changing tray in the toilet. A few children were present on my first Saturday visit. There are a couple of high chairs, though the sort without a tray. A noticeboard has a "This is a breastfeeding welcome place" poster.

Is this place laptop-friendly? I'll stick my neck out and say it is: I have observed several others working away on laptops; the staff willingly gave me the Wi-Fi password (a fairly obvious one); Wi-Fi connection was instant, and even though it the speed varied from 2 to 35 Mbp, it was stable. However, there seem to be only two pairs of electrical sockets. Nevertheless, I'd consider this a place where I'd feel comfortable to work for two or three hours, table-hopping if necessary.