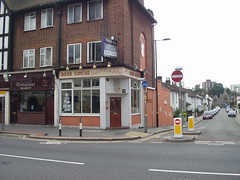 The Beer Circus was a bar/cafe/continental-style pub on Croydon High Street serving lots of interesting continental beers, in bottles and on tap. Real cider was known to put in an appearance too, and the place was in several Good Beer Guide editions. Unfortunately the Beer Circus closed for good in late 2007.