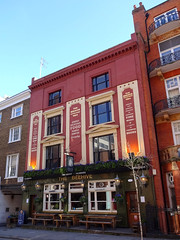 It closed following a fire in August 2015, but reopened in January 2017. (For an assessment of the pub pre-fire, see earlier version of this page.)

A padded banquette runs the full width of the pub beneath the front window, and the centre of the room is dominated by tall back-to-back booth-like seating. The floor is pale wood boards, and the walls are half-panelled. It has an overall feel of being set up more for diners than for drinkers, though it's absolutely fine to come in just for a drink, and there's some more pub-like seating at the back beyond the bar. Three picnic benches out the front offer space for open-air drinking.

Kake visited on a Saturday afternoon in March 2017. There was one other party in when I arrived around 3:15pm — a group of four just finishing a late lunch — and two more diners came in while I was there. Music was playing, not too loud, but a rather incongruous mix of dance and soft rock.

Both handpumps on the bar were on, offering Truman's ales. They also have various keg taps for craft beer. A pint of lime and soda was £2.40; rather steep considering the soda came from a gun rather than bottles.

Accessibility: A step to get in. Once you're in, there's an accessible toilet on the level, though it's rather blocked in with furniture and is kept locked with a non-RADAR lock (key behind the bar). Other toilets are down a flight of stairs with a landing in the middle and a handrail on one side reaching only half of the way down.