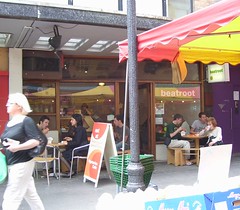 Beatroot was a vegan-friendly vegetarian cafe in Soho. It closed for good in April 2015 due to redevelopment of the block photo of stripped shopfront.

Very vegan-friendly vegetarian cafe in Soho; it's buffet-style, but not self-service. Apparently the staff are very generous with the portions though. Fresh juices and smoothies too.

Take away or eat in - eat in is just eating the same box as takeaway, but on the premises, either inside or outside. Staff were friendly, and didn't mind us just sitting outside after finishing our meal, cleaning and putting away all the other tables around us.

Bec visited on 19th July 2007. I had a large take away box which had a chickpea & spinach curry, roasted potato, carrot & parsnip, tofu stir fried with cabbage, and some amazingly tasty vegan sossidge rolls. When Nick and a vegan friend visited on 4th April 2008, the large box was considered to be suitably filling. As of May 2008, a large box is £5.90, a medium box £4.90, and a small box £3.90.

There are usually about 8 dishes to choose from - there will be a vegan and non vegan lasagna thing - and rice and stirfry and curry. Most of the options are vegan. The cold salad bit looks good but I've never tried it.