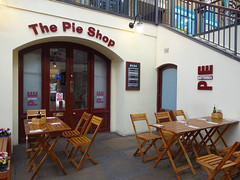 Small pie restaurant and takeaway, tucked away in a corner of the lower floor of Covent Garden market.

There’s not much space inside, with a few small tables and some bar stools on either side. The walls have been painted and tiled white however, which stops it feeling like a dank cellar.

Kat visited for takeaway on a Tuesday lunchtime in March 2017. It was almost empty: apart from half a dozen indecisive tourists looking at the menu above the counter when I arrived (they opted for somewhere else in the end), only one of the small tables was occupied. A butternut squash and goat’s cheese pie (true pie, with pastry all the way around) with roasted new potatoes and veggie gravy was £9. The pie itself was very filling and pretty flavourful, although quite stodgy, and the pastry had gone a bit soggy by the time I got back to the office. The potatoes were well cooked and nicely peppery, but most importantly there were plenty of them.

Kat's verdict: one of the better pie options in the area, assuming you like a stodgy pie (I do). It's expensive compared to say, Pieminister, but probably to be expected given the location.

Accessibility: the lower section of the market is accessed via stone steps with a handrail. A low ramp to get in. Once inside, it’s flat throughout, though the tables are small and cramped quite close together. Didn’t see any customer toilets.